2021 marks the fifth year for the Willamette River Festival. Growing from the idea of a small, one day paddle race, the Festival is now a community wide event, spanning a week-long series of activities, presentations and numerous partners all gathering to celebrate the Willamette river throughout its course between Eugene and Springfield.

In the beginning…
For many years, paddlers in Eugene have enjoyed the unique feature of the Canoe Canal adjacent to the Willamette River. Community members would regularly paddle up the canal, then enjoy an easy whitewater run back down the river (or return via the canal) back to the a starting point at the “Duck Pond” on the east side of the bridge coming into Alton Baker Park.

On the downriver portion of this route, there remains remnents of a former dam and mill race, including cement weirs and leftover rebar in the far left channel, which is currently under the assessment of a feasibility study per efforts by Cascadia Wave, a non-profit organization working to to modify this danger into a whitewater park.

2017 – The First River Race was born!
Finally, sitting around over a couple beers, two friends, Ryan Allen (Northwest Canoe Tours) and Sam Norgaard-Stroich (UO Outdoor Program) decided to pull the trigger on a long-discussed idea of running a race up the canal, and down the river. But first, there were permits to get, logistics to figure out, and ultimately, a final decision about the purpose for realizing the event. After bringing together a group of key stakeholders, including members of Willamette Kayak & Canoe Club and staff from the City of Eugene Recreation, Willamalane Parks and Recreation District, ACA, University of Oregon Outdoor Program, and Willamette Riverkeeper, the Willamette River Festival (formerly Eugene River Festival) idea was “born” to help develop safer, more inclusive access to the river through enhanced river safety and paddling, stewardship opportunities and ecological, cultural and historical education.

Indigenous Connections
The Whilamut is an area of protected land set aside to honor the Kalapuya people past, present and into the future, and the Canoe Canal runs right through it, with the river bordering the southern boundary. We realized immediately that this area had also been used for thousands of years by Kalapuya paddlers in canoes – for transportation, gathering food, and most likely many other reasons. Working together with Kalapuya Elder, Esther Stutzman, the Festival has prioritized the decolonization of river recreation, setting the tone for appropriate use of the Whilamut Natural area, and further interrupting erasure of native peoples.

Honoring native cultures became one of the Guiding Principles of the Festival. Native Voice have become a primary focal point in the Festival. Currently, Esther Stutzman and her family annual engage in the Festival with a traditional invocation, blessing, and public song. The Festival has also adopted a formal Land Acknowledgement, with explanation of how and why we are centering the Festival around honoring native peoples. The invisibility of Native Peoples has been long enabled by white settlers and current undertones of outdoor recreation. The Festival serves to interrupt this process, and build a new way to engaging in outdoor recreation on Native Lands. The Festival also utilizes segments of the Whilamut Transportation Crossover Mural (underneath Interstate 5 bridge along the Canoe Canal) as a primary graphic in Festival communications and memorabilia.  This panel is a large mural depicting Kalapuya life in canoes, crossing the Whilamut area, on the Willamette River. The mural artist is Susan Applegate, descendant of the Applegate pioneers. The history of Susan and Esther is also another interesting story, and their connection in the Festival, is a way of showing a positive path forward for Native/settler relationships. 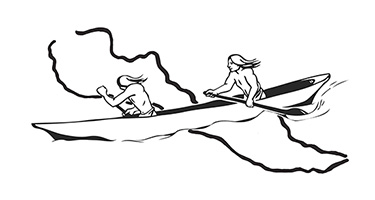 The Festival Grows
Today, the Festival has expanded well beyond its early conception of a single day paddle race to a broad celebration of history, culture, recreation, ecology, and stewardship. Indigenous involvement and direction has deepened over the years as well, including Native led tours of the Talking Stones, Ethnobotany and Restoration clinics/workshops by Kalapuya and Siletz tribal members, Indigenous created films and performances by Wisdom of the Elders, and of course, the celebration of Gudukut, the Kalapuya carved canoe that has made a presence at the Festival for folks to see, touch, and paddle!

In addition to Indigenous involvement, the Festival partners increase each year. Thanks to the City of Eugene and Willamette Riverkeeper as presenting sponsors, the Festival has grown to include many other supporting partners, supporting educational events, art, stewardship opportunities, and inclusion of many other sections of the river beyond just Alton Baker and Eastgate Woodlands Parks. As a “can’t miss” hallmark summer event, the Willamette River Festival welcomes communities from across the Willamette Valley and beyond to celebrate #OurWillamette!

Celebrate and build affinity for the Willamette River through Recreation, History, Culture and Ecology

Emphasize the concept of “celebration”

Provide a variety of opportunities to connect Festival-goers to the river; these can include both passive and active Festival components – for example:

Fostering a regional connection to the Natural World

Respect the natural ecosystem of the river and educate others about how to respect it – including thoughtful placement of festival activities and imparting Leave no Trace principles with Festival participants.

The Festival must be sustainable and self-supporting. At the very least, it must pay for itself. Preferably, through sponsorship, the Festival could fund a seed budget for subsequent years, while generating proceeds to benefit a non-profit community organization reflecting the guiding principles of the event – (may use a 5-1-c-3 fiscal agent).

Create a “community driven” event as a sound business model

The Festival structure will consist of a simple, and efficient business model, using a central “Producer” to connect and engage community leaders and organizations in fulfilling the “Guiding Principles” as determined by the City and Eugene River Festival founding partners.

The Producer will engage with community members that represent a broad cross-section of river recreation, cultural and environmental interests of the Willamette Valley including (but not limited to) organizations such as the UO Outdoor Program, Willamette Riverkeeper, River House Outdoor Center, and the Native American community.

The Producer will also work with event stakeholders in the following ways: